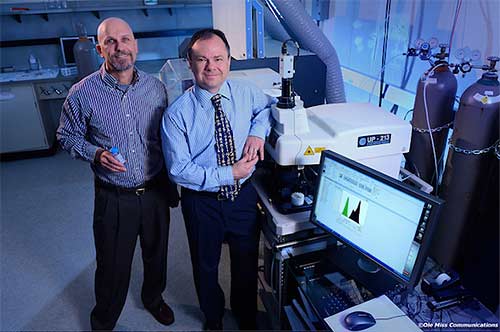 Flood stage in a river can mean that water has spilled out of the river channel and has reached the levees designed to retain floodwaters. As the river rises up the levee, there is always concern that the levee could fail, resulting in a wall of water pouring through the gap.

Two University of Mississippi professors have discovered that chemical differentiations in waters from the sand boils, formed from seepage along levees, may help identify which levee locations are at higher risk of failure.

Gregg Davidson, UM professor of geology and geological engineering; and James Cizdziel, assistant professor of chemistry and biochemistry; collaborated with J.R. Rigby of the USDA Agricultural Research Service National Sedimentation Laboratory and Dean Pennington of the Yazoo Mississippi Delta Joint Water Management District on the study. The team analyzed the chemistry of sand-boil discharges to trace variable pathways of seepage beneath levees during the 2011 Mississippi River flood. Their findings appeared in the January 2013 issue of Applied Geochemistry, a prestigious refereed journal published by Elsevier.

“Sand boils are formed when river water seeps under the levee fast enough to carry sediment to the surface on the other side, creating a mound of sand with water bubbling up through the center,” Davidson said. “These are a significant concern because sediment is being removed from underground, possibly from under the levee.”

Relief wells are wells drilled next to a levee that are allowed to overflow onto the ground to relieve pressure, but sand boils may still form. The researchers sampled water from the Mississippi River, from sand boils and from relief wells over a 55-kilometer span north of Vicksburg near the end of the 2011 flood.

“Shallow flow pathways under a levee are more likely to cause levee failure than deep pathways, but the sand boils look the same and no methods have been previously developed to easily tell which are from deep pathways and which are from shallow pathways,” Cizdziel said. “This has the potential for identifying levee locations of higher and lower risk of failure.”

The team used the chemical composition to differentiate between sand boils formed from seepage along deep and shallow pathways. Two distinct pathways for seepage under the levee were identified based on the elemental composition of water samples.

All analyses were done in Cizdziel’s inductively coupled plasma mass spectrometry, or ICP-MS, laboratory. ICP-MS, a sensitive multi-element technique that provides a powerful analytical tool for trace elemental and isotope analysis, can detect metals and other minerals in tiny concentrations. It is used in a variety of environmental, biological, medical, forensic, geological and archaeological studies.

“The chemical composition of discharge from sand boils at these sites was clearly not just river water, nor a simple mixture of river and groundwater, but appears to reflect unique weathering or redox interactions occurring within the upper portion of the alluvial aquifer,” Cizdziel said. “Distinguishing shallow and deep seepage pathways may prove useful for evaluating site specific risk of levee failure.”

The ICP-MS used in this study was obtained using a grant from the National Science Foundation.