An Appetite for Excellence 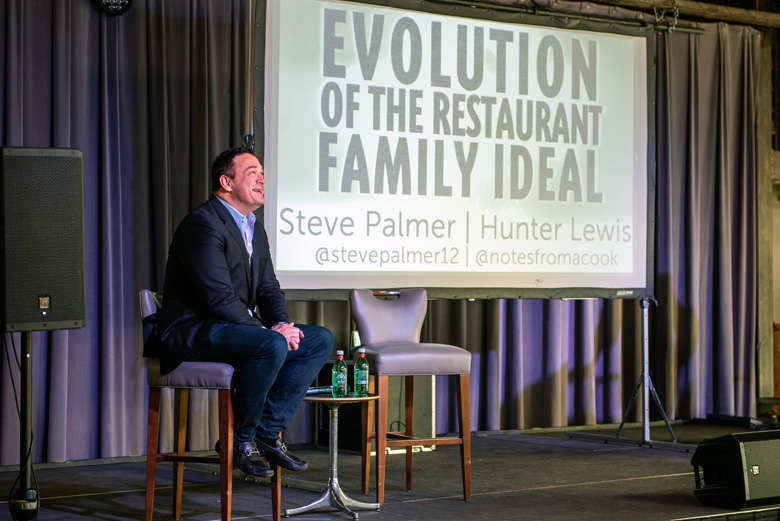 When restaurateur Steve Palmer overheard one of his servers say she’d like to buy a home if only she had the down payment, he started a company-wide home loan program.

“We loan our employees their down-payment interest-free,” said Palmer of Charleston, South Carolina, who has 890 people on his payroll. “We make zero money on it and we’ve had seven staff members buy homes in the last year.”

Palmer owns Indigo Road Hospitality Group and, within the restaurant industry he’s renowned as a visionary who supports transformative progress where he sees a need: among his staff, on behalf of his customers and in his community — in that order.

One of his most recent investments is in the form of a $100,000 gift to the John T Edge Director of the Southern Foodways Alliance (SFA) Endowment, which supports the future of the SFA, based at the University of Mississippi.

“I grew up in the South and felt like I knew what it means to be from the South, but the SFA has taught me what it really means: It’s about the history, heritage and reconciliation,” Palmer said. “I love the thought-provoking conversations the SFA inspires. Sometimes they’re uncomfortable; sometimes they’re conversations that challenge me to revisit old ideas. That’s what I really love.”

Palmer hopes his gift will enable the SFA to continue bringing people groups together over meals for generations to come.

“We still feel like a gangly teenager,” Edge said. “With this gift, Steve is helping to ensure that one day when I depart my job, the SFA will have a smooth transition of leadership and that, as we hit our 20-year mark, we have our sight on our 40-year mark. He offers us stability and he offers us belief.”

Palmer’s generosity is widespread. He’s on the verge of offering a tuition match up to $20,000 per person for employees who want to go to culinary school or get a degree in hospitality management. Additionally, he covers the cost of counseling for those who want to keep their mental health in check.

Every staff member has Palmer’s personal cell phone number, so they can call him directly; he regularly asks employees to review management to ensure they’re being treated fairly; and he enforces a zero-tolerance no-harassment policy.

“I just want to say how much we all respect Steve in this industry and thank him for his mentorship, generosity and his willingness to share his experiences,” said Ashley Christensen of Raleigh, North Carolina, a participant in the SFA’s 2019 winter symposium.

In his community, Palmer is passionately involved with charities that fight hunger. Additionally, his restaurant group hosts an annual dinner, the most recent of which raised $500,000 in one night — enough to underwrite the 2019 food budget for a Charleston soup kitchen.

Palmer also founded an addiction recovery program in the Carolinas designed specifically for restaurant workers who struggle with substance abuse. He hopes to have Ben’s Friends chapters in all 50 states.

Why so much compassion?

“Gratitude,” he says. “I’ve been given more than I ever thought I would have, so why wouldn’t I want to give back? Right? That’s just natural to me. I feel sort of obligated, but not by anyone but myself. It’s almost a responsibility. I want everybody to win.”

The need for a home. Hunger pangs. Substance abuse. Palmer has experienced all of these in his 49 years.

Homeless in Atlanta, Georgia, then 13-year-old Palmer worked first as a dishwasher for Yen’s Chinese on Chamblee Dunwoody Road, making $3 an hour, paid in cash, and later as a line cook for Steak ’n Shake. These were his initial introductions to the industry that would ruin his life and then save it.

Now, Palmer is 17 years sober from an addiction to alcohol, cocaine and other drugs. He runs 20 restaurants that bring in tens of millions in revenue. He’s about to marry the woman of his dreams. And he wants everyone to win.

“I was a very broken person from a dysfunctional family. For me, the restaurant was my family. It was where I found acceptance, where I found everybody is equal. As long as you show up and work hard, then there’s a place for you,” Palmer said.

“A restaurant always represented, for me, a safe place to go for work. It always felt like home to me.”

Every day at each of Palmer’s restaurants, business stops for a half hour to give the “family” time to gather.

“Everyone is required to sit down and have conversations,” he said. “What we found culturally is if you just get everybody to eat with each other every day, there’s a mutual respect that gets formed.”

That same principle is at the heart of the SFA.

“One of the things that’s deeply important for a non-profit and for an academic institution is to receive money from people who share your values, who believe in your mission, whom you’re proud to sit at a table with. Steve is the ultimate embodiment of that in the way he comports himself, the way he runs his businesses, the care, thought and leadership he provides,” Edge said.

“The notion that he sees value in what we do and in my career at the university means the world to me because I respect him so much. He, as a donor, helps us educate a new generation of donors,” he continued. “This is how you comport yourself; this is how you support a university and an institute. It’s transformative.”

The John T Edge Endowment is open to gifts from individuals and organizations. Checks may be mailed to the University of Mississippi Foundation, with the endowment noted in the memo line, to 406 University Ave., Oxford, MS 38655. Gifts can also be made online by visiting give.olemiss.edu.

The Southern Foodways Alliance (SFA) documents, studies, and explores the diverse food cultures of the changing American South. Its work sets a welcome table where all may consider history and the future in a spirit of respect and reconciliation. A member-supported organization based at the University of Mississippi’s Center for the Study of Southern Culture, the SFA collects oral histories, produces films and podcasts, publishes stories, sponsors scholarship, mentors students and stages events that serve as progressive and inclusive catalysts for the greater South.