Alumnus Honored by Navy for Science and Technology Achievements 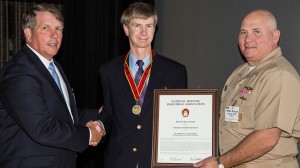 A University of Mississippi graduate has earned the National Defense Industrial Association Bronze Medal for Achievements in Science and Technology.

Kerry Commander (BS physics and mathematics ’80, PhD physics ’85), a Clarksdale native who also earned a master’s degree in applied mathematics from the University of Arizona, was recently presented the award by Navy Rear Adm. Michael Jabley in Groton, Connecticut.

Commander, a research scientist and administrator in the Panama City division of the Naval Surface Warfare Center, was selected for the award because of his “numerous technical achievements that have laid the foundation for several fleet programs.”

“My most significant technical accomplishment to date is leading the first successful demonstration of a synthetic aperture sonar on a fully autonomous underwater vehicle in CJTFEX04-2 by our science and technology team,” Commander said in a Navy news release. “This was a major milestone in the transition of this early S&T program to advanced development programs and the beginning of a new era in MCM (mine countermeasures).”

He has more than 29 years of distinguished service with the Navy, which began when he became a research physicist at the Naval Coastal Systems Center in Panama City, Florida. His early research led to important discoveries in nonlinear bubble dynamics, multi-phase flow and inverse scattering acoustics and had a direct application to a surface ship torpedo defense program.

But he says the award recognizes the teamwork, rather than an individual effort.

“The reward is really a group recognition award for our science and technology team that worked for years to develop advanced technology that could perform some parts of the MCM mission from an autonomous underwater vehicle, removing people and marine animals from a very dangerous job,” Commander said. “The team consisted of experts in sonar systems, signal and image processing, unmanned systems and autonomy, and of course, all the support personnel from the test and evaluation side of the lab.”

(Commander) serves as Naval Surface Warfare Center Panama City Division Science and Technology Department Head. Today, he is a senior leader for technical research and development initiatives of 180 scientists and engineers performing science and technology work in support of mine/undersea warfare and expeditionary warfare. Additionally, he serves as NSWC PCD’s Chief Technology Officer (CTO) where he is known for demonstrating outstanding leadership in developing and implementing latest S&T trends to evolving naval requirement.

“This prestigious undersea warfare award is a tribute to Dr. Commander’s leadership and technical excellence,” said NSWC PCD Technical Director Ed Stewart, a member of the Senior Executive Service Corps. “Currently, as Chief Technology Officer (CTO) at NSWC PCD and head of the Science and Technology Department, his contributions to the undersea community are many and profound.”

At NSWC PCD, Commander is personally involved with and responsible for the execution of science, technology, unmanned systems, strategic systems, and threat analysis programs supporting Navy and Marine Corps research, development, test and evaluation, homeland defense, and force protection. This also includes championing and obtaining funding for associated programs, developing sponsor relationships, and driving the technology transition and Fleet support processes.
He has published and presented his research in numerous papers and conferences, and is recognized internationally as a Subject Matter Expert in Acoustics. He was the U.S. Navy representative on the Technical Committee for the Institute of Acoustics’ International Conference on Synthetic Aperture Sonar and Synthetic Aperture Radar, held in 2010 in Lerici, Italy and again in 2014.

His professional standing within the technical community has been recognized through his election to the grade of Fellow of the Acoustical Society of America (ASA). Dr. Commander currently serves on the ASA’s Technical Committee on Physical Acoustics and is a technical reviewer for the ASA’s Journal. He also continues to serve as a reviewer for the classified Journal of Underwater Acoustics and the IEEE Journal of Oceanic Engineering.