Leadership Laboratory: From Pupil to Pulpit 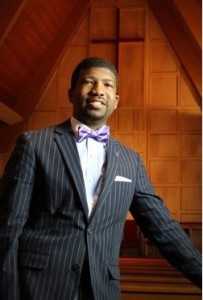 This year Black History Month events at the University of Mississippi began with a speech by alumnus Rev. C. Edwards “CJ” Rhodes (B.A.’04).

Rhodes’ years at UM shaped the leader he is today. The son of famed civil rights attorney Carroll Rhodes Sr., was the youngest pastor of the oldest historically black congregation in Jackson, Mount Helm Baptist Church, from 2010 until September 2013 when he became Alcorn State University rector of the Oakland Memorial Chapel, director of student religious life and assistant professor in the Department of Social Sciences. The author and radio show host also serves on the board of the Urban League of Greater Jackson, the Center for Ministry, the Mississippi Religious Leadership Conference, and is former president of the Farish Street/Main Street Project.

The Hazlehurst native took full advantage of his collegiate experience—working with the William Winter Institute for Racial Reconciliation, serving an appointment to the Chancellor’s Committee for Respect and Sensitivity, co-founding two college ministries and serving as associate minister to youth and young adults at two local Baptist churches.

“I was surrounded by great professors and students who saw my potential and persuaded me to use my gifts to do good,” he said. “Through the Winter Institute and the leadership of director Susan Glisson, I found a safe space to think out loud about strategies and goals to help the University become greater through challenging the administration and student body to reimagine who we are.”

The only black philosophy major at that time found support in the department. “I still laugh at Dr. Bill Lawhead, who inquired how a Baptist-Pentecostal preacher found his way into philosophy, given how mistrusting many Evangelicals are of the area of study,” Rhodes said. “I am a better leader because folks like him inspired me to be.”

Dr. Ethel Young-Minor, Senior Fellow at the Lucky Day Residential College and associate professor of English, first saw him sitting on the floor in the Union bookstore reading books about religion from the shelf as if in a library. “I was so intrigued by this voracious reader that I had to ask his name and by the end of the conversation I was taking him home to meet my husband, who took him in as our son in ministry,” she said.

UM prepared Rhodes for Duke Divinity School, where he earned a master’s and served as vice president of the Black Seminarians Union. “There were a few moments at Duke where my ability to mediate tense conversations around race and gender, cultivated during UM days, were essential in moving seminarians and administration through difficult yet critical decisions,” he said.

Rhodes appreciates his time in college and advises students, “You have at least four years to get a quality, world-class education. Get it! Let nothing or no one get in the way of becoming intellectual and culturally well rounded and deep. Get as much book knowledge as possible, attend every major lecture or event. Ask the right questions. Be in the room when decisions are being made. When you leave, know that you’ve amassed excellent skills to be competitive in the market but more importantly to be a global citizen able to do the most good in your chosen field of influence.”

Ole Miss News and the Daily Mississippian contributed to this story by Mary Love Fair.