His goals revolve around helping improve education, life in Mississippi 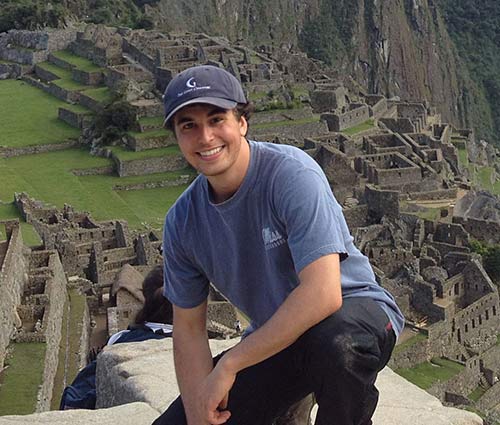 Douglas Odom on the Inca Trail in Peru.

Students are encouraged to engage in community service as part of the learning experience at the University of Mississippi. Douglas Odom, who graduated with a bachelor’s degree in English and classics in 2013, took those lessons and made them a core part of his life.

During his time as a student, Odom served the university and community in many ways. He was a part of the Columns Society and UM Judicial Council, and he worked as an Ole Miss Ambassador, orientation leader and committee member for the Big Event in 2012 and 2013.

After graduation, Odom traveled with his father. They spent 15 months adventuring in the Western Hemisphere: dog sledding in Canada, hiking the Inca Trail in Peru, zip lining in Costa Rica, scuba diving in the Atlantic, Pacific, Caribbean and Cenotes Caverns of Mexico and visiting nearly half the Major League Baseball stadiums across the nation.

His love of the university and the state of Mississippi drew Odom back to Oxford in fall 2014. Since then, he served as an AmeriCorps VISTA with the North Mississippi VISTA Project. He worked in the College of Liberal Arts with programs such as FASTrack and College Corps and with the nonprofits More Than a Meal, the Boys and Girls Club, and some schools, including Della Davidson Elementary and Bramlett Elementary.

“Doug has successfully developed programs for college students, organized field trips for high school students and strengthened summer learning and after school programs for elementary students,” said Stephen Monroe, assistant dean of the College of Liberal Arts. “Doug cares about education. He is a fabulous colleague with a bright future.”

Odom has also been working closely with Janice Carr, a university employee and Abbeville resident, and her project at the Gordon Community and Cultural Center. She and other board members at the center launched a seven-week summer enrichment for 40 elementary students in the county this summer. Odom worked with local businesses and organizations to provide food, school supplies and other general funding to help make the summer enrichment program a success.

Odom is the 12th member of his family to graduate from UM, following his father, mother, three aunts, three cousins, two brothers and a sister-in-law.
This fall, he is pursuing a master’s degree in higher education administration from the Peabody College of Education and Human Development at Vanderbilt University.

“I want to venture out and learn everything I can, but the ultimate goal is to bring what I learn back to Ole Miss,” Odom said. “So many Mississippi children grow up here and then, first chance they get, they leave. We need more Mississippians to stick around, or at least to come back after leaving.

“That was always my mentality. I knew I wanted to give back to the state that has been so good to me as I’ve grown up. I may be leaving to pursue higher education, but my plan will always be to come home.”