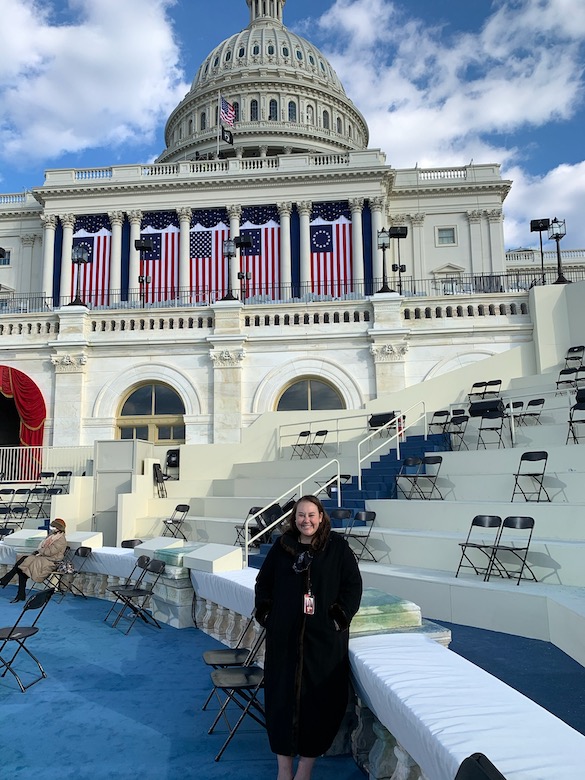 As volunteers manager with the Joint Congressional Committee on Inaugural Ceremonies, Molly Harris (BA political science 14) played a role in the inauguration of US President Joe Biden on January 20, 2021. She was selected to lead the recruitment, training, and management of approximately 300 volunteers.

“I saw everything you didn’t see on TV and all that goes into a successful and momentous event,” Harris said. “The event is perfectly choreographed down to the literal second.”

How did your interest in political science develop?

I was raised in a bipartisan household, but politics wasn’t a mainstay of conversation (but that’s changed over time). I find it fascinating that my parents grew up and lived less than 30 miles apart and believe very different things. Visiting the state Capitol building in Illinois when I was a first grader where both my mom and aunt served as page was an amazing connection at a young age. As a seven year old, I had a chance meeting with President George W. Bush on August 6, 2000 at a “whistle-stop” tour at the Amtrak station in Normal, Illinois. It was the highlight of my little life at that point.

Tell us about your time at the University of Mississippi.

I participated in JumpStart as an incoming freshmen, countless intersessions, and summer school—I never wanted to leave Oxford and I was eager to engage in new and exciting classes.

I majored in political science with an emphasis in comparative politics (which is fitting since I found my way to JCCIC) and a minor in history. I had many professors who impacted my time (Nordstrom, Smith, and Winburn) for political science and (Holm, Twitty, Ross, and Namorato) for history. 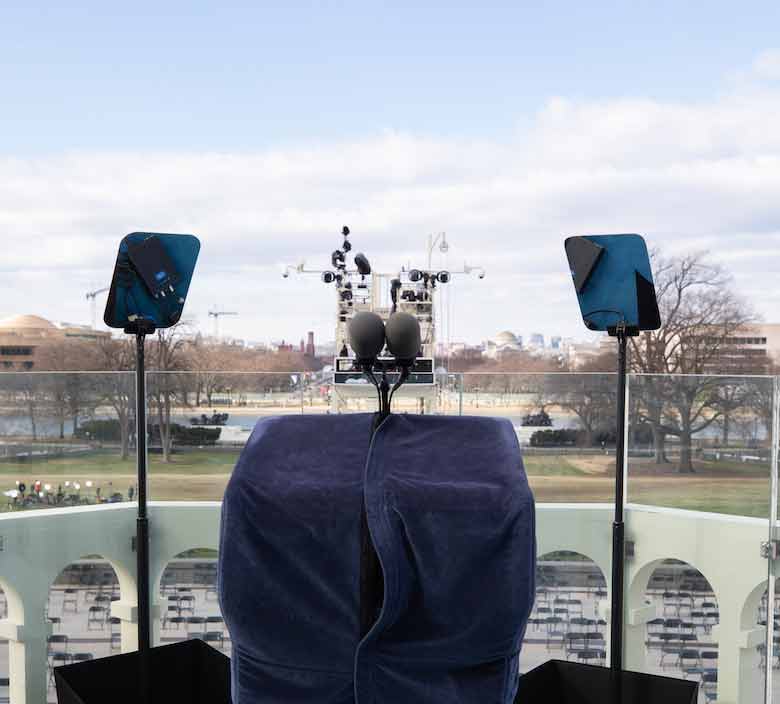 Molly Harris’ view preparing for the 2021 inauguration in Washington, DC. Since 1901, and in accordance with the 20th Amendment of the United States Constitution, the Joint Congressional Committee on Inaugural Ceremonies has been responsible for the planning and execution of the Inaugural Ceremonies of the President-elect and Vice President-elect of the United States at the Capitol. Submitted photo

What has been your path since graduation?

During my time at Ole Miss I interned on a political campaign and two summers in Washington, DC in congressional offices. I graduated s a semester early in December 2014—right after the Republicans took the majority in the November election. I had a job to start in the 114th Congress by Thanksgiving with my hometown Member of Congress, Rodney Davis. I’ve worked for four Members of Congress Rep. Rodney Davis IL-13, Rep. David Valadao CA-21, Rep. John Shimkus IL-15, Rep. Pete Stauber MN-08.

“I am excited when others share this passion with me and they come to the Hill wanting to make an impact. It doesn’t matter your political affiliation; being an engaged citizen and voter is important.”

Since October 2020, I have been working for the Joint Congressional Committee on Inaugural Ceremonies (JCCIC). I was selected to lead the recruitment, training, and management of ~300 volunteers for the 59th Inaugural Ceremonies for President Biden. On Inauguration Day, these volunteers did everything from “directing traffic” inside the Capitol Building, escorting former Presidents, and assisting with other VIP’s. I also helped design and implement a brand new health and security operation due to COVID-19.

Why should a prospective student consider coming to UM to study?
If you want to attend a university where you will be in a safe and caring family, Ole Miss is the place for you. Faculty, staff, and your fellow students will assist you in becoming the best version of yourself. I can’t imagine a better place to call “home.”