Alumni Return Home to Perform in ‘The Light in the Piazza’ 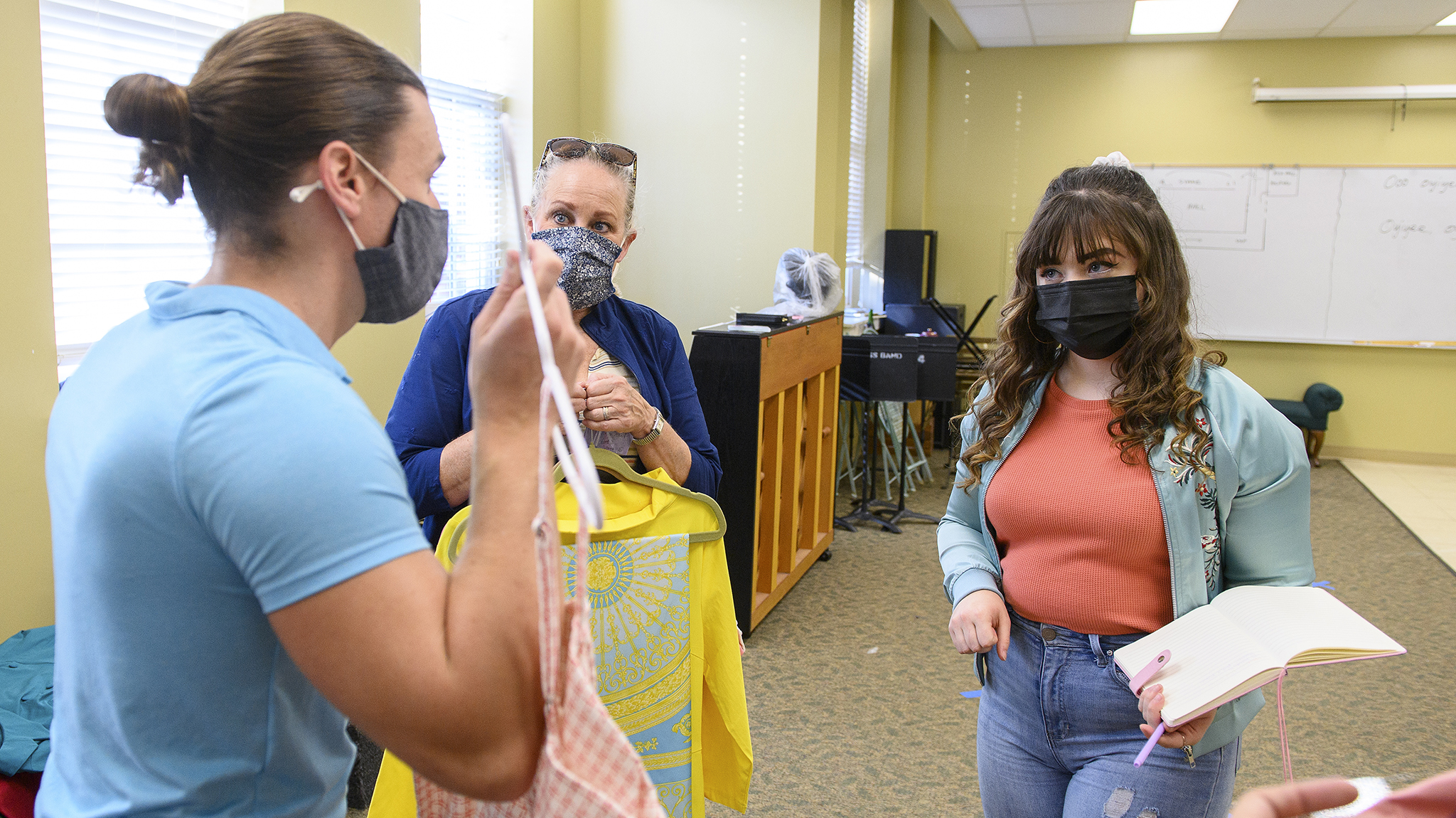 Blake McIver Ewing (left), director for the UM Opera Theatre production of ‘The Light in the Piazza,’ goes through wardrobe options with female leads Mary Donnelly Haskell and Emma Johnson, an Ole Miss senior. Ewing and Haskell, who starred in a 2009 production of ‘Piazza’ in Los Angeles, are working to help student performers get a glimpse of life as a professional through this production. Photo by Thomas Graning/Ole Miss Digital Imaging Services

Several University of Mississippi alumni have returned to campus to lend their expertise, talent and guidance to students by working with the Department of Music on the upcoming UM Opera Theatre production of “The Light in the Piazza.”

Mary Donnelly Haskell and Calvin Ellis, who both earned degrees in music education, will sing lead roles as parents of the two young stars, played by students Emma Johnson and Isaiah Traylor. Lacey Hindman, who earned a degree in vocal performance, is helping prepare several of her students for roles in the production as a visiting faculty member this semester.

“The talent and generosity of these three musicians is outstanding,” said Nancy Maria Balach, professor and chair of music. “Most importantly, the example they provide our students and the mentoring they offer is of immeasurable benefit to the student experience.” 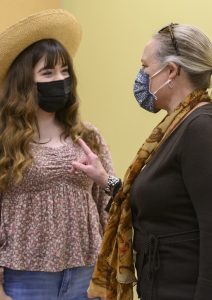 Professional actor and singer Mary Donnelly Haskell (right) shares insights with Ole Miss senior Emma Johnson during a rehearsal for the Opera Theatre production of ‘The Light in the Piazza.’ Haskell, who earned a degree in music education from UM, is among several alumni who are helping to mentor student performers and prepare them for careers in the field. Photo by Thomas Graning/Ole Miss Digital Imaging Services

“The Light in the Piazza,” based on a novella by Mississippi author Elizabeth Spencer, follows the story of Margaret and Clara Johnson, a mother and daughter from the American South who are traveling in Florence in the 1950s. When Clara meets handsome young Italian Fabrizio Nacarelli, their instant connection forces their families to negotiate hope, love and clashing cultures in unexpected ways.

A hit on Broadway, the show won six Tony Awards, including Best Original Score and Best Orchestration, for its lush, complicated, melodious music and lyrics, written by composer Adam Guettel.

Singer and actor Haskell is reprising her role as Margaret Johnson, for which she drew wide acclaim in a 2009 Los Angeles production. A product of the music department and an experienced professional performer, she understands the impact that such a significant production can have on student performers.

“Although what Guettel has put on the page is intricate and sophisticated music to perform, it resonates with the audience in a deep and powerful way,” she said, noting that it’s even more transformative for the singers and musicians who perform it.

“This is challenging music, a reach for any singer,” Balach agreed. “It’s the kind of musical that makes you a better performer. The fact that our students are getting to immerse themselves in this rich material at this stage of their career is an amazing opportunity for them, and they are definitely meeting the challenge.”

Haskell said she is enjoying the opportunity to work with students.

“I’d love for them to take from me an appreciation of how my years here at Ole Miss as a music major prepared me on multiple levels for all the opportunities that were to come my way: singer, actress, recording artist,” she said “It’s all a part of the artistic journey.” 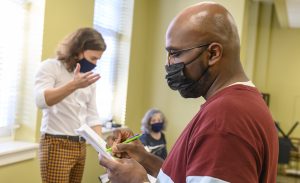 UM alumnus Calvin Ellis (right) makes notes on his script during an early rehearsal for ‘The Light in the Piazza’ as director Blake McIver Ewing (background) discusses a scene. Ellis, who plays Signor Nacarelli, says that returning to a performance role is helping him better prepare choirs under his direction at a Memphis church. Photo by Thomas Graning/Ole Miss Digital Imaging Services

Ellis, who plays Signor Nacarelli, has enjoyed this opportunity to return to a performance role. The associate music director at Second Presbyterian Church in Memphis is working toward a master’s degree in choral conducting at Ole Miss, but his primary professional role is to prepare his choirs, so individual performance has taken a back seat.

“I’m gaining a lot from this experience,” he says. “I used to do a lot of performing. It brings me joy to perform in this way and grow in this way as an artist.

“I hope the students take away the fact that sometimes in your professional career, you’ll come across opportunities that require you to jump in and go all-in quickly. The professional side of it is that you come prepared, you accept what you’re given and you put in the time that is necessary to contribute at a high level.”

Ellis’s character is an Italian father who represents a dignified, cautious force in the life of his son Fabrizio, even as he watches Fabrizio falling in love with an unlikely young woman.

“If I were Italian, I think I might be a bit like him,” Ellis said. “He is dignified in his demeanor, in his carriage and character. He is very easy for me to access, character-wise, and I love speaking the full Italian, as well as the Italian-dialect English lines.

“The students are fantastic. I’m thoroughly impressed with their talent, their commitment and their professionalism, especially at this stage. It’s been fun to hear their gifts.”

As student cast members prepares for their roles, they are supported by instruction they receive from their studio professors. Hindman, a visiting faculty member this semester, is one of them. 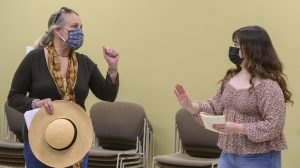 “Lacey is an extremely talented singer who has a knack for hard work and pedagogy, so she’s been a terrific addition to our faculty this semester,” Balach said. “Her instruction is definitely contributing to the success of several of our student cast members.”

Hindman said that the training she received as an undergraduate working with collaborative pianist and professor Amanda Johnston, music director of UM Opera Theatre, and her studio teacher, Balach, gave her the skills she needed.

“They also gave me a firm understanding, through experience, that a thorough preparation makes a performer ready to step on stage,” she said. “So, I work with my students on foundational skills: the breath, expansion and even how to approach practicing in a careful, methodical way.

“This is something I really learned from my own opera experience. I love working with these students to prepare because I’ve been in their shoes.”

Zoe Bofill, one of Hindman’s students, plays Dama Nacarelli. Hindman has helped her build on her strong technical foundation and has been helpful as a fellow soprano, Bofill said.

Pursuing her second bachelor’s degree, this one in vocal performance, Bofield, from Huntsville, Alabama, said she values the chance to work with the alumni in the cast, as well.

“Working with Mary Haskell has been such a wonderful experience, and I really cannot say enough good things about her,” she said. “She is absolutely full of wisdom, which she often shares with those of us who are lucky enough to share the stage or rehearsal room with her. 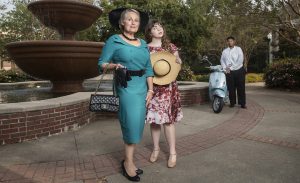 “She has this incredible presence on stage that clearly delineates between student and professional.”

Haskell noted that other professionals are also adding enormous value to the production. Blake McIver Ewing, who played the young male lead alongside Haskell in the Los Angeles production, has joined the music faculty as a visiting artist for UM Opera Theatre this semester and is directing the show.

“It’s such a joy to watch Blake work with our students and share his wealth of knowledge regarding not only this particular musical piece, but on the broader spectrum of our industry, as well,” Haskell said. “He brings decades of experience in multiple disciplines, right here to our campus so that our students can learn hands-on, and that’s really so exciting.”

For students, the impact of working with both Ewing and the alumni cast members reaches beyond providing an example of a working artist and his or her professional career, Ellis said.

“It’s a great experience for students to see an alum who loves Ole Miss giving their all back to the university, and to see that you’ve never learned all you can learn, or performed all you can perform or grown all you can grow,” he said.

Performances of “The Light in the Piazza” are set for 7:30 p.m. Nov. 19 and 3 p.m. Nov. 21 in the Gertrude C. Ford Center for the Performing Arts. Tickets are available at the UM Box Office.