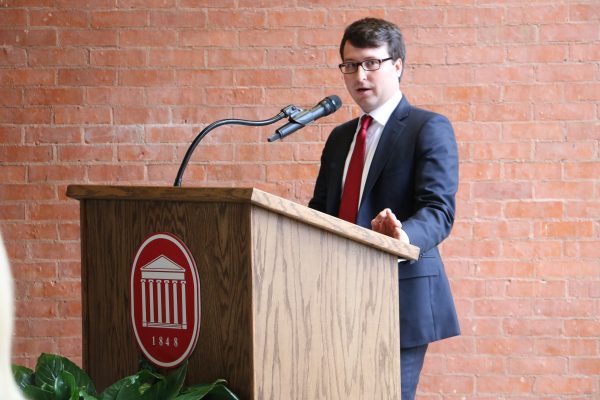 A line of blustery, threatening weather moving through the area didn’t stop more than 100 University of Mississippi students, faculty, staff, administrators and alumni from celebrating the successes of the Sally McDonnell Barksdale Honors College on Thursday (March 30) afternoon.

The crowd squeezed into the Honors College’s great room to dedicate the expanded and renovated building, putting the cap on a two-year project. The ceremony, which was relocated from outdoors because of the weather, also marked the 20th anniversary of the Honors College and was followed by a reception and open house.

“The Sally McDonnell Barksdale Honors College is an incredible asset to our university,” Chancellor Jeffery Vitter said. “It distinguishes us among peer institutions and allows Ole Miss to offer exceptional personalized opportunities to extremely talented students. I am very excited to be celebrating its expansion and renovation today.”

Others making remarks during the ceremony were Dean Douglass Sullivan-González; David Buford, director of risk management for the State Institutions of Higher Learning; Honors College alumni Dr. Marc Walker and Christin Gates Calloway; and Jim Barksdale, who helped launch the Honors College when he and his late wife, Sally McDonnell Barksdale, donated funds to expand the university’s Honors Program in 1997.

Moving into the new space was “a 10-year dream come true,” said Sullivan-González, also a professor of history.

“The new building represents a great blend of classroom and study space to go deep into conversation with peers on the tough questions of the day,” he said. “We are grateful for the new and renovated space at the SMBHC.”

“This is great and I’m so proud of what has been accomplished here during the past 20 years,” Barksdale said. “In life, you always want the chance to do something significant and different.

“This opportunity came along at the right time, the right place and with the right people. What a wonderful return upon our investment.”

Both Calloway and Walker said their Honors College experiences have proven invaluable to their careers.

“My professional path for the past 11 years has been built upon my Freshman Ventures at Weyerhaeuser Paper in Seattle and my medical missions trips to Bolivia, all made possible through the Honors College,” said Walker, a 2006 alumnus who earned his bachelor’s degree in biology with minors in chemistry, religion, and philosophy. He earned degrees from both Harvard Medical School and Harvard Business School and is set to become chief resident in plastic and reconstructive surgery at Yale-New Haven Hospital next year.

“I’ve learned that surgery is a lot easier with the right tools and a committed team. That’s exactly what the Honors College offers.”

A Kosciusko native who earned her bachelor’s degree in psychology in 2011, Calloway said the Honors College is where she “grappled with some of the toughest social, educational and political challenges of our time.”

“The Honors College is one of the most unique and enriching opportunities I’ve ever experienced,” said the doctoral student at the University of Wisconsin at Milwaukee. “Had I not attended here, I wouldn’t have had the courage, determination and tenacity to continue my education at some of the nation’s most prestigious institutions of higher learning.”

The Honors College has grown tremendously from its humble beginnings. Opening with an initial class of 121 students in 1997, its student body has grown to more than 1,400.

The program annually attracts high-performing students from across the state and country. The average ACT score for incoming scholars last fall was 30.9, and their average high school GPA was 3.92.

For the last two years, more than 400 freshmen have joined the SMBHC each year. To accommodate the growing student body, the Honors College broke ground on its expansion in 2014, and the new addition opened in March 2016. The original building was then renovated, and work was completed in December.

“Our students enjoy deep conversations, and this is a welcoming space that encourages us to take time to engage in meaningful discussion,” Sullivan-González said. “This provides the needed infrastructure to assure that this program will be the ‘tip of the spear’ to lead the university’s academic charge for years to come.”

The Barksdales made the idea of an Honors College possible, enabling the purchase and renovation of the Alpha Delta Pi sorority building to house the new program. That first gift also endowed 16 scholarships and provided funding for operating expenses.

Other generous donations include endowments from the Parker estates to fund scholarships, and from Lynda and John Shea to support study abroad fellowships.

With the death of Sally McDonnell Barksdale in December 2003, the Honors College was renamed in her memory in spring 2004.

“The University of Mississippi and, indeed, all of the state’s citizens are indebted to the Barksdales for their continued and transformative support,” Vitter said. “For 20 years now, the impact of the Honors College has been far-reaching, helping create a vibrant legacy of attracting the best and brightest to Ole Miss.”

For more information on the Sally McDonnell Barksdale Honors College, go to http://honors.olemiss.edu.