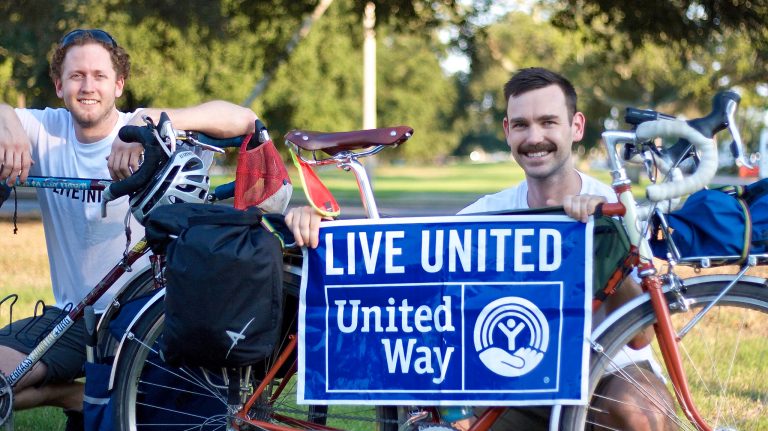 Two University of Mississippi alumni embark this weekend on a 300-mile bike ride in support of United Way of Oxford and Lafayette County.

After Saturday evening’s Ole Miss-Vanderbilt football game, Adam Vinson and Charlie Wildman plan to ride their bikes from Nashville, Tennessee, to Oxford, arriving in time for the annual Egg Bowl matchup with Mississippi State University on Nov. 26. The two are raising money to assist families in the Lafayette-Oxford-University community during the holidays.

They plan to ride down the Natchez Trace Parkway, which has always been a goal of theirs. Once they realized an opportunity to make this a charitable event while supporting the Rebels, they decided to make it a reality.

“I noticed there were two games separated by about 300 miles over Thanksgiving week,” Vinson said. “I asked Charlie if he was interested in cycling from one to the other, because he has done rides like this before, and he said he was absolutely down!”

The work began to make this a charitable adventure, and the friends decided that United Way of Oxford & Lafayette County would be the best beneficiary.

The donation breaks down to just 10 cents per mile, so Wildman and Vinson are encouraging the LOU community to contribute to the United Way via https://app.mobilecause.com/vf/RebelsRide or text RebelsRide to 71777. Donations will benefit families in the Oxford and Lafayette community.

“We’re really excited that they are Ole Miss alums and care about this area,” said Ben Strassman, an AmeriCorps VISTA working in the United Way chapter. “They spent their formative years in Oxford and want to make sure the money directly affects our county and our city to make it the best it can possibly be.”

Strassman added that 99 cents of every dollar donated will stay in the LOU community.

This will be Vinson’s first ride of this distance, but Wildman is a veteran of charitable journeys. He and a friend organized and completed a 25-day, 2,000-mile ride from Cumberland, Maryland, to Telluride, Colorado, during the summer of 2015 and raised $11,000 for a New Orleans-based disabilities charity.

Vinson and Wildman met in 2004 as members of the Delta Kappa Epsilon social fraternity at Ole Miss.

Vinson, an Oxford native, graduated from UM in 2008 with a bachelor’s degree in philosophy and psychology. Upon graduation, he served with Teach for America in the Mississippi Delta. He earned a master’s degree in education from the University of Pennsylvania in 2012 before moving with his wife, Katherine Bensel, to New Orleans, where he is pursuing a graduate degree in electrical engineering from the University of New Orleans.

Wildman graduated from UM in 2009 with a bachelor’s degree in geological engineering. He has worked at firms in Dallas and New York City, where he worked onsite during construction of the Second Avenue Subway and served as the president of the Ole Miss Club of New York. He lives in New Orleans and is working on a master’s degree in civil engineering at the University of New Orleans.