Alumni Association to Honor Seven at Homecoming for Achievement, Service

The Ole Miss Alumni Association is honoring seven distinguished alumni with its highest annual awards as part of Homecoming 2018. Created in 1974, the Hall of Fame honors select alumni who have made an outstanding contribution to their country, state or the University of Mississippi through good deeds, services or contributions that have perpetuated the good name of Ole Miss.

Warner Alford (BBA 60, MA 66) of Oxford will receive the Alumni Service Award for service to the university and the Alumni Association over an extended period. Shaquinta Morgan (BE 03) of Madison, Alabama, will receive the Outstanding Young Alumni Award, which recognizes alumni who have shown exemplary leadership throughout their first 15 years of alumni status in both their careers and dedication to Ole Miss.

The Alumni Association will host a reception for the honorees on Friday, Oct. 5, at 6 p.m. in the Gertrude C. Ford Ballroom at The Inn at Ole Miss. A ticketed dinner for the award recipients will follow the reception at 7 p.m. Those interested in attending the dinner should register in advance by calling the Alumni Association office at 662-915-7375 before 5 p.m., Friday, Sept. 21. Cost of the dinner is $100 per person, or tables of 10 are available for $1,000. A total of $25 from the sale of each individual seat and $250 from each reserved table will go toward the Herb Dewees Alumni Association Scholarship. 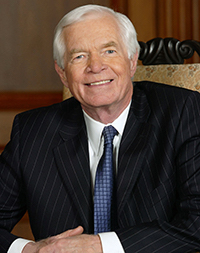 Thad Cochran retired as U.S. Senator for the State of Mississippi in April 2018.

In 1955, Cochran enrolled in the College of Liberal Arts at the University of Mississippi. He earned a Bachelor of Arts degree with a major in psychology and a minor in political science. He was elected president of his social fraternity, Pi Kappa Alpha, was a company commander in the Navy ROTC, student body vice president, and was selected for membership in Omicron Delta Kappa, a national honorary leadership fraternity.

Cochran earned his undergraduate and law degrees from the University of Mississippi and studied international law for a year under a Rotary Foundation Fellowship at Trinity College Dublin, Ireland. He has been awarded honorary degrees from five other colleges and universities.

Before his election to Congress in 1972, Cochran practiced law in Jackson served as an officer in the U.S. Navy. He was first elected to the Senate in 1978 and was re-elected six times.

Cochran’s wife of 50 years, Rose Clayton, passed away in 2014 after a lengthy illness. The Cochrans have two children and three grandchildren. In 2015, Cochran married Kay Bowen Webber in Gulfport, Mississippi. 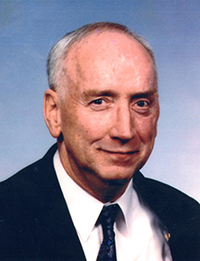 Howard L. Gerlach was born in New Castle, Pennsylvania. He enlisted in the U.S. Marine Corps after graduating high school. In 1962 Gerlach was selected for a full scholarship under the NROTC program. After graduating from Ole Miss he was commissioned a second lieutenant in the Marine Corps. He served as a rifle platoon leader in Vietnam before being wounded. After recovering, he was later sent for a second tour in Vietnam as a senior advisor to a Vietnamese infantry battalion.

Gerlach was able to return to Ole Miss on assignment as the NROTC Marine Officer Instructor and was promoted to the rank of major in 1975.

Gerlach’s final active duty assignment was to the Second Marine Division where he was promoted to lieutenant colonel. There he assumed command of 1st Battalion 8th Marines, which was deployed in May 1983 on a peacekeeping mission in Beirut, Lebanon. On October 23, 1983, their headquarters building was attacked by a suicide truck bomber. The bomb leveled the building and killed 241 Marines, sailors and soldiers and wounded approximately 80 more. Among many other injuries, Gerlach’s most serious was to his spinal cord, which required nine months of recovery and rehabilition.

He retired from the Marine Corps in 1985 and started a new career in 1986, mainly in acquisition and logistics. He first served as a federal contractor and later as a civil servant at Headquarters Marine Corps and the Defense Logistics Agency. He retired in 2008.

Gerlach and his wife, Patty, have two children and two grandchildren.

Mac Haik graduated from the University of Mississippi with a degree in Marketing and Sales Management. At Ole Miss Haik was co-captain of the football team, was selected by national leadership fraternity Omicron Delta Kappa and was voted Colonel Rebel by the Ole Miss student body.

Haik established Mac Haik Enterprises (MHE) shortly after retiring from professional football, where he was selected as the first draft choice by the NFL’s then-Houston Oilers. Since its inception, MHE has grown from a start-up entity of two people to an organization with 11 affiliated companies that employs approximately 3,025 associates and generates revenues in excess of $2.2 billion per year.

Haik has personally been involved in consulting, brokerage and development of over $950,000,000 of property.

Mac Haik Realty recently completed 3,114,076 square feet of office, hotel, restaurant and car dealership projects in the Houston Energy Corridor alone. The original Hilton/Embassy Suites hotel project received the Deal of the Year award from Hilton, the only such award given in the entire country. Haik was recently recognized as Hilton Hotels’ Hilton Developer of the Year.

Mac Haik Automotive Group is the largest independent automotive group in the state of Texas and the 15th largest independent automotive group in the United States. Mac Haik Chevrolet in Houston has been the recipient of the prestigious Dealer of the Year Award 15 years in a row. Mac Haik Automotive Group has won 15 Triple Crown Awards, awarded by Ford Motor Company annually to approximately 21 dealerships out of over 3,300 nationally. Haik also received the Legacy Award from Bill Ford of Ford Motor Company for outstanding sales, service and customer satisfaction rating and community service.

Vernon R. “Randy” Kelley III has focused his vision and talents on assisting the people of Northeast Mississippi in expanding their horizons and improving their quality of life for four decades. As a young man, Kelley left his home in Missouri to chase the dream of playing football at the University of Mississippi. While his time on the gridiron never flourished, his academic training resulted in a Bachelor of Arts degree in Banking and Finance and masters of urban and regional planning.

In 1976, he joined the Three Rivers Planning and Development District, assuming the role as executive director, overseeing a small budget serving eight counties. His vision has created numerous services and generated almost incomprehensible results. Today, Three Rivers operates 10 different corporations that range in size from three counties to statewide, with a combined budget in excess of $193 million. Kelley initiated the formation of the PUL Alliance, a unique three-county (Pontotoc, Union, Lee) effort to attract a major industry—a Toyota automotive assembly plant to be exact.

Kelley received the National Association of Development Organizations award for outstanding executive director of a multi-county planning and development organization in 1985, and later served as president of this national organization. He received the Appalachian Regional Commission Federal Co-Chairman award in 1988, was named one of North America’s top 50 economic developers in 2015 and received the U.S. Small Business Administration Lifetime Achievement Award in 2017.

Kelley lives in Tupelo with his wife, Bonnie. He is the father of two daughters and has one granddaughter. 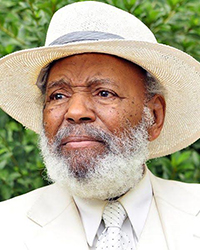 James Meredith was born in Mississippi in 1933 and raised on a farm with nine siblings. After graduating from high school in Florida, he served nine years in the Air Force before becoming the first black student at the University of Mississippi in 1962 and later organizing his lone “Meredith March Against Fear” in 1966.

Meredith has authored 27 books and says that his published work is his greatest contribution to Mississippi and America. In his first book, he wrote an account of his experience, “Three Years in Mississippi,” which was published in 1966.

Meredith married Mary June Wiggins in 1956 and had three children, John, Joseph and James. Mary died unexpectedly in 1979. In 1981, Meredith met and married Judy Alsobrooks, who had one son, Kip, from a previous marriage. James and Judy have one daughter, Jessica Meredith Knight, and share 12 grandchildren.

A tree farmer in Attala County and a Jackson businessman, Meredith continues to speak around the country.

Warner Alford dedicated over half of his life to the University of Mississippi. From his playing and coaching days on the football field to his administrative duties, Alford served his alma mater in many capacities, including 16 years as director of athletics.

Alford earned three letters as a guard on standout Rebel football teams from 1958 to 1960. He was co-captain of the 1960 undefeated national champion team and served as athletics director for Ole Miss from 1978 to 1994.

During his years as athletics director, he helped expand athletic opportunities for both men and women at the university, increasing varsity sports from eight to 15. Vaught-Hemingway Stadium received a major facelift under his leadership, which included a new press box, 29 skyboxes and the addition of a lighting system, bringing night football to the Oxford campus. Other major facility additions included construction of a new baseball stadium and tennis center.

He later returned to Ole Miss and held positions as executive assistant for development for the UM Foundation, coordinator for external programs for the Trent Lott Leadership Institute and worked with the Ole Miss First scholars program.

He served as executive director of the Ole Miss Alumni Association from 2004 to 2008, overseeing significant growth in the club program and the addition of the tower to The Inn at Ole Miss.

A native of McComb, Alford is married to the former Kay Swayze of Oxford. They have three children, Thomas Swayze Alford, John Warner Alford III and Phyllis Alford Daniels, and seven grandchildren.

Shaquinta Morgan moved to Washington, D.C., with dreams of working for the Environmental Protection Agency after finishing her chemical engineering studies at the University of Mississippi. That dream was placed on hold after the Sept. 11, 2001 attacks, within weeks of her moving there.

She began her engineering career by negotiating both a meeting and a job with the owner of a small water conservation company that wasn’t hiring. Morgan moved on to expand her expertise beyond water conservation to be inclusive of all aspects of energy management, expanding her professional career with some of the most respected Energy Service Companies (ESCOs) in the world, like NORESCO and Johnson Controls.

A licensed professional engineer with mechanical engineering emphasis, a certified energy manager and a LEED accredited professional, Morgan joined the Philips Lighting End User Services team, where she is now director of Solution Architecture for the United States. Her team designs complex lighting controls and data solutions for large entities within federal, state and local government, office and industry, retail and hospitality, and sports and entertainment segments across the United States.

A member of Alpha Kappa Alpha Sorority, Inc., Morgan also is active in the community and local schools. She serves on the boards of directors of Christmas Charities Year Round, the Connections Council to Huntsville Hospital and the Madison City Schools Growth Committee. She also serves on the advisory board to the University of Mississippi School of Engineering. Morgan resides in Madison, Alabama, with her husband Markeeva and their two daughters, Mallory and Sydney.