by Ashton Dawes for The Daily Mississippian
November 15, 2013 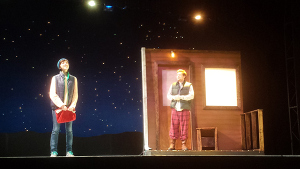 Everyone enjoys a good love story … how about nine? Ghostlight Repertory Theatre’s production of “Almost, Maine” is sure to touch your heart with absolute overload of cute romance, tragic moments of just a minute too late and enough comedic relief to work your abs.

Max Mattox, director and University of Mississippi sophomore, expressed the cast and crew’s readiness to present the magic of “Almost, Maine.”

“We just need an audience,” Mattox said when questioned about the first performance. “It’s a story. We need someone to see it and react to it.”

And he was right. From the moment the lights went up, those in attendance had their eyes focused on the stage as they were living through the Northern Lights lighting up the same few moments in different couples’ lives.

Just as the title of the play suggests, “Almost, Maine” abounds with the feeling of almost — the yearning for a love that is just beginning or the heartbroken sadness of a love that almost worked.

This two-act play is interspersed with comedy and tragedy, with the overlaying theme of romance to fill the gaps. Although Almost is a fictional town, named for its “end-of-the-world” location, as Gloria exclaims in the second scene of the production, it was obvious that while the lights were dimmed and the action on stage was happening, everyone believed it was real. Of course, the chilly air in Fulton Chapel added to the illusion.

The first act opens with a wintry confession scene and subsequent philosophy on how close a person really is to another. Without giving too much away, the first act is relatively lighthearted, with just enough tense moments to break up the literal love flying through the air. Of course, you will have to see the production to understand.

The second act gives the audience a break from the cute giggles and happy couples in exchange for moments of drama and broken hearts. As the second act draws toward its closing scene, the mood is still low, hitting the audience hard as the characters suffer through the mistakes that cost them the love of their lives. Then, from nowhere, the cast pulls out all the stops and delivers true comedy in the form of a true happily-ever-after ending. The entire show is pulled together through a prologue, interlogue and epilogue that show just how far someone in love is willing to go for that love.

“Almost, Maine” has two performances left, one today (November 15) at 7:30 p.m. and one at 2:30 p.m. Sunday (November 17). Tickets can be purchased on ghostlightrep.org for $8 or at the door in Fulton Chapel for the same price. Everyone should take time to see Ghostlight Repertory Theatre’s production of “Almost, Maine.” It is far more than almost worth it.