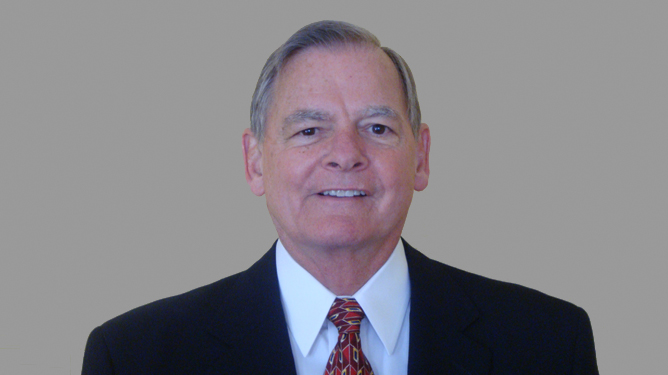 OXFORD, Miss. – As futurists continue to make their predictions, Dean Copeland is challenging University of Mississippi students to consider the current trends that have global effects and their implications for the world 50 years from now.

Through a bi-weekly seminar, the retired corporate lawyer and executive has given students at his alma mater a rare opportunity to learn from his professional and personal experiences. His “Trends and Effects of Globalization in the 21st Century” seminar series recently wrapped for the spring.

“If I can pass my knowledge and experience on in a practical way, that is meaningful to me,” Copeland said. “I’ve never been more excited about teaching anything because of the dynamic effect and rapid changes globalization is having – some positive and some negative.”

The six-session course was offered after UM College of Liberal Arts officials asked him to lead the Public Policy Leadership 221 class. Texts covered during the course included “The Next Decade: Where We’ve Been … Where We’re Going” and “The Next Hundred Years: A Forecast for the 21st Century,” both by George Friedman. Students are graded on the Z/F scale and receive one credit hour.Enrolled are Adam Blackwell of Natchez, Brett Bobe of Vincennes, Ind., Morgan Carter of Pascagoula, Emily Corban of Tupelo, Zachary Huffman of Woodland, Vinod Kannuthurai of Hazelhurst, Evan Kirkham of Houston, Texas, Emily Lovejoy of Lexington, Ky., August Maples of Lucedale, Hunter Nicholson of Brandon and Brent Webber of Wheaton, Ill.

Nicholson, an accountancy, public policy leadership and Spanish major, said Copeland takes special care to present the topics in such a way that each student can see the implications our discussions have on his or her own career paths.

“Business all too often is perceived as a heartless profession, and Mr. Copeland has asked me to challenge this notion and look for ways that will make any career path I choose a benefit those around me and our global society,” Nicholson said. “Although Mr. Copeland is officially retired, he spends a considerable time researching the world’s most pressing problems and he invites us to consider solutions.”

Other students expressed appreciation to Copeland for his willingness to share his knowledge, which they expect will prove useful as they embark upon their individual career paths.

“Matters regarding globalization in our ever-shrinking world have enthralled me, and this course has really opened my eyes even more to the far-reaching effects of this issue,” said Maples, a junior public policy leadership major. “Mr. Copeland is an extremely knowledgeable man who reads a lot of all the right things to be qualified in teaching about the trends of globalization, not only in relation to America but how all the different global regions interact and what that (may) hold for our future.”

“His first-hand knowledge and experience are unique and very valuable,” Blackwell said. “In discussion, he challenges students to think critically and to be as specific and factual as possible. He does not skirt around the issues, but is straightforward in his analysis.”

“Mr. Copeland has shown us some of the dangers of the future that are not traditionally covered as natural security threats, including the dangers of technology outpacing the need for employment, the depletion of fresh water sources and global warming,” Kannuthurai said. “I expect to emerge from his class a more analytic thinker who will be able to aptly find interconnections among global events and will be able to link their significance to the United States. The skills I’ve learned from Mr. Copeland will help me with my career aspirations in the intelligence community or the state department.”

Though Copeland, as a lawyer, has taught legal seminars in the past, returning to where he began was especially fulfilling, he said

“I grew up here. I attended public schools here. This is home or, what I call ‘place,’” said Copeland, who volunteered his time to teach the course. The College of Liberal Arts covered his stays at The Inn at Ole Miss and awarded him a $3,000 stipend to cover travel expenses.

The curriculum was created by Copeland following discussions with Michael Metcalf, interim chair and professor of public policy leadership, professor of history and senior international officer for the provost’s office.

“His interest in teaching a course at UM surfaced in conversations with the UM Foundation and the College of Liberal Arts,” Metcalf said. “I had the opportunity to meet with him in Washington last fall to discuss that interest and to ascertain the fit with PPL curriculum. Our conversation convinced me that the fit would be a good one, and we pressed forward to make arrangements accordingly.”

“The College of Liberal Arts is fortunate to have such a distinguished alumnus as Dean Copeland commit to giving back to his alma mater in such a personal manner,” Hopkins said.

Although he may be open to teaching the seminar again, Copeland said he would definitely make some changes for future classes. His main problem is having enough time to cover what he calls the “primary drivers” in global trends.

“I’ve got the core down. I like the approach of getting the various subject areas covered first and then applying them to certain significant countries, like the U.S., E.U. and China,” Copeland said. “Next time, I would make technology a separate subject area rather than primarily a change agent and include development in the natural sciences that might have tremendous effect.

“I don’t take any positions on the ‘ought to be’ areas I discuss because that is not the point. I want the students to have the facts to displace potential bias in their thought process. After I’ve accomplished that, they are free to take whatever informed positions they wish. I believe a well-informed citizenry makes for a better, more stable society.”

A graduate of Murrah High School in Jackson, Copeland earned his bachelor’s degree in history from UM in 1961. He later attended the University of Oxford in England as a Rhodes Scholar and graduated from Yale University’s School of Law. Copeland served in the U.S. Army as adjutant of the Judge Advocate General’s School in Charlottesville, Va., before going into private law firm practice.

For 30 years, he was an associate and then partner at Alston & Bird LLP in Atlanta and Washington, D.C., practicing in the securities, corporate mergers and acquisitions and financial institutions areas. Specializing in corporate governance and advising boards of directors, Copeland served as chair of the corporate and banking section of the State Bar of Georgia and is a member of the American Law Institute.

While Copeland resides in Atlanta, he also spends time in Alexandria, Va.

For more information about the Department of Public Policy Leadership, visit https://www.olemiss.edu/depts/public_policy_leadership