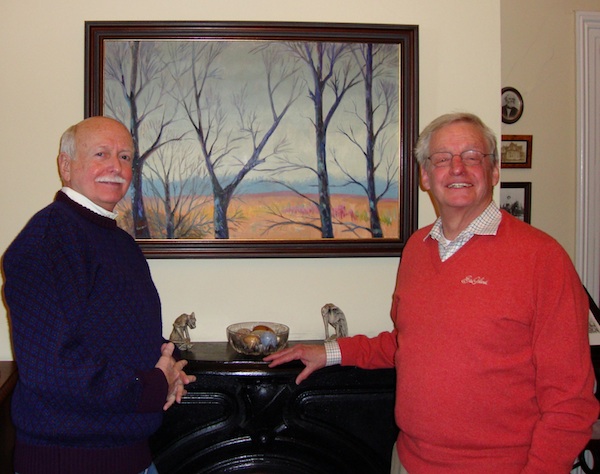 Ruff Fant, right, and his wife, Susan, have made a major gift to the University of Mississippi to establish the Hubert McAlexander Chair of English. McAlexander, left, and Fant have been friends since their childhood days in Holly Springs, Miss.

Much like chess pieces moving around a game board, Ruff Fant and Hubert McAlexander have been in and around each other’s lives since they were boys. In fact, it was the game of chess that bonded their fast friendship in the first place.

“We were both kind of intellectual little boys and I think that intellect was one of the bonds between us,” said McAlexander, recalling that the two played hundreds of games of chess together as children in Holly Springs, Miss. They’ve been close friends ever since.

Close enough that Fant and his wife, Susan, now of Washington, D.C., made a $1.5 million gift to the University of Mississippi in honor of that friendship, establishing the Hubert H. McAlexander Chair of English.

“I was just flabbergasted when I learned about that!” McAlexander exclaimed. “I just couldn’t believe it.”

Fant says he wanted the chair established not only to honor his friendship with McAlexander but also to serve as a tribute to his friend’s teaching and writing.

“His career should be an inspiration to all students,” Fant said. “I also wanted to honor, indirectly, Hubert’s many friends at Ole Miss and in Oxford. Much is said about change at Ole Miss, but Hubert and his generation were at the center of change. What we look back on as change was, to them, as college students, their life. I truly believe that Hubert and his generation were Ole Miss’ great generation; I hope they will always be remembered as such.”

The son of former UM law professor Lester Glenn Fant, Jr., Fant is founder and chairman of TowPath Partners, a Washington, D.C.-based specialty finance company that invests in mature renewable energy projects. A practicing attorney for more than 30 years, Fant has substantial experience in federal taxation, corporate transactions, corporate finance, governance, and organizational structure. He was a partner in the Washington office of Sidley & Austin from 1984 until 1995 and served on the firm’s executive committee. From 1969 until 1984, Fant was an associate and then a partner in the D.C. law firm Cohen & Uretz. He served as an adjunct professor at Georgetown University Law Center, teaching an advanced course in corporate taxation and ethics in the graduate program from 1978 to1996.

“I wanted to give to the English Department to support the study of liberal arts. Today liberal arts education is under attack in the press and from certain politicians on the grounds that study of liberal arts is not good job preparation. But liberal arts teaches students how to think critically, adapt to new situations and communicate with others; these are the most valuable skills in the job market today,” Fant said.

“Technology is evolving very rapidly, and narrowly based technical knowledge quickly becomes obsolete. But the ability to think critically, understand and adapt to new situations, and communicate effectively with others will always be valued in the workplace. I was an English major in college, and I believe that my study has been extremely valuable to me both in my professional life and in my life in general.”

UM Chancellor Dan Jones says he applauds both the Fants and McAlexander for their contributions.

“We are profoundly grateful for the devotion and generosity of Susan and Ruff Fant. They obviously gave great thought to creating a meaningful tribute to Hubert McAlexander. Their significant gift honors his lifelong teaching and writing career, while also strengthening a university they all love. This gift will have a far-reaching impact on generations of UM students, mirroring the level of influence Hubert McAlexander has had on hundreds of college students during his distinguished career,” the chancellor said.

When the endowment matures, the McAlexander Chair of English will be filled through a nationwide search. The Fants’ gift will enable the UM English department to recruit an esteemed senior scholar with strong teaching and research credentials.

“It’s very expensive to hire a senior faculty member with a national reputation,” said Ivo Kamps, chair of English. “We therefore typically hire at the assistant professor level, which is less expensive, and which is fine, but it takes about 14 years before a new hire reaches the rank of full professor. When you receive a private donation like the one made by Mr. and Mrs. Fant, you are able to use that money to leap over those 14 years of development and hopefully attract someone in the prime of their career.”

The English department has two named chairs: the Howry Professor in Faulkner Studies held by Jay Watson and the Ottilie Schillig Chair in English Composition held by Ben McClelland.

“The McAlexander Chair will substantively improve our department and raise our academic profile as one of the strongest English departments in the region,” Kamps continued. “We expect the professor who holds it to have a significant impact in the classroom, teaching our Ph.D. students in small seminars and also lecturing in the survey classes we offer at the sophomore level. In short, he or she will teach majors, non-majors and graduate students, as well as direct M.A. theses and Ph.D. dissertations.”

McAlexander is professor emeritus of English at the University of Georgia (UGA), where he has inspired students with engaging lectures on Southern literature for more than 50 years. Also a celebrated author, he attracted widespread praise for biographies of authors Peter Taylor and Sherwood Bonner.

McAlexander would like to see the chair filled by someone with a genuine interest in students.

“What was good about my long career is that no matter what life would bring you – and everyone my age knows it brings all sorts of things – there were always the students, and I never thought that I was sacrificing in thinking that they were important,” he said. “What I was mainly interested in was their thinking. That’s really central. When you’re teaching literature, what is it about? What’s going on here? I wanted them to think and draw their own conclusions, not just repeat what some critic has decided. I’d like to see this chair filled by a teacher who’s going to make students think.”

McAlexander has many memories of his days as an undergrad at UM: “My roommate was Tom McCraw who won the 1985 Pulitzer Prize in History and is in the Hall of Fame. I remember talking until dawn … there’s something about that college age in which people are just opening up to life and realizing certain things and wondering about certain things. Ole Miss in the college years was an awakening for me. I was very happy there. I had very good professors like Dr. Charles Noyes, and I was fascinated by Adwin Wigthall Green.”

McAlexander was a member of Pi Kappa Alpha fraternity. “We rushed Ruff, although I knew he was going to Vanderbilt, but they didn’t,” he said, laughing. “But Ruff spent many good weekends on campus.”

After graduating from UM in 1961, McAlexander returned as a 23-year-old graduate instructor, teaching his first classes in 1963, and finished a master’s degree in 1966. He moved to the University of Wisconsin, where he experienced culture shock—many thought he was ignorant or a bigot because of his Southern accent—while completing his dissertation on William Faulkner for a doctorate in English. There, he met his future wife, Patricia.

“I saw her the first day,” he said. “She was very good looking and still is. She was in two huge lecture classes that I was in back-to-back. I thought maybe it was love at first sight. I was looking at her and I thought she was looking at me, but she’s blind as a bat. (laughing) She can’t see anything. (laughing) So when I finally approached her, she had never seen me!”

After receiving the doctorate, McAlexander taught briefly at Texas A&M before landing his longtime job at Georgia. Known for his dapper style, sometimes outlandish humor and no-nonsense grading, he became a sought-after teacher, receiving nearly every UGA teaching award. He is a four-time recipient of the Outstanding Honors Professor award, twice earned the Sandy Beaver Teaching Professor Award and was tapped for the Josiah Meigs Award—the university’s highest teaching honor. He retired in 2010 but continues to teach literature courses for the Osher Lifelong Learning Institute.

McAlexander was nominated for a 2002 Pulitzer Prize for Peter Taylor: A Writer’s Life, which also was a finalist for the Southern Book Critics Circle Award for Nonfiction. His other books include The Prodigal Daughter: A Biography of the Nineteenth-Century Regionalist and Feminist Sherwood Bonner, Conversations with Peter Taylor, A Southern Tapestry: Marshall County, Mississippi: 1835-2000, and Strawberry Plains Audubon Center: Four Centuries of a Mississippi Landscape.

The two friends’ paths have crossed many times and in many different ways. Fant and McAlexander also have much in common – almost all stemming from their deep roots in Mississippi.

How much was tuition then?

“It was nothing! Thirteen dollars, I think.”

Individuals and organizations interested in providing support to the McAlexander Chair of English can send a check with the fund noted in the memo line to the University of Mississippi Foundation, P.O. Box 249, University, Miss. 38677; contact Denson Hollis at 662-915-5092 or dhollis@olemiss.edu.