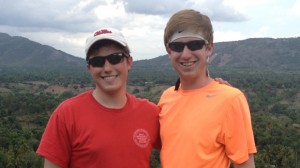 When University of Mississippi students Andrew Smelser and Wesley Youngblood traveled to Haiti for the first time, they encountered what could only be described as an “eye-opening experience.”

“I really was able to understand what a third-world hospital was like,” said Smelser, a native of Owens Cross Roads, Ala., who is entering his first professional year of pharmacy school. “It was shocking. No air conditioning, very limited care, only one small cabinet of medications – it was unlike anything I’d ever seen.”

Smelser and Youngblood, a Columbus native and rising senior pre-med biology major, traveled to Haiti on a medical mission sponsored by the Christian Relief Fund in May. It was Smelser’s second trip to the Caribbean country in two years.

“I learned a lot from the medical aspect of the trip,” Youngblood said. “We had a physician with us, and we were working in the local schools and small villages. Interacting with the local children left the biggest impact on me.”

Most of their time was spent at the hospital in Cap-Haitien, the country’s second-largest city. Smelser and Youngblood assisted hospital staff by checking vital signs, looking for symptoms of worms in pediatric patients, assisting with work-related injuries and even handing out food to the hungry.

“It’s like comparing apples to oranges when you consider the health care that you receive in the U.S. versus Haiti,” Smelser said. “There really is no comparison. The treatment is incredibly different.”

Youngblood was particularly surprised that Haitian hospitals do not provide food for their patients.

“The family has to bring food to their loved ones in the hospital,” Youngblood said. “We brought peanut butter sandwiches, boiled eggs, bananas and juice to pass out. We ran out by the time we got to the emergency room.”

In addition to working at the hospital, the mission group volunteered at what locals referred to as the “old folks home.” Many elderly residents there were unattended, and the group provided them with a different form of care.

“We provided more of a hand of comfort, which is different from how we think of health care in the U.S.,” Smelser said. “Some of the residents had limited mobility, and we massaged their arms and legs. We even sang some songs with them that they recognized.”

Pharmacy and pre-med students often work together in interdisciplinary environments during their professional training. Smelser and Youngblood took advantage of a similar opportunity on their trip. While traveling to the village of Benjamin, they came across a girl who had seemingly fainted from dehydration.

“We had to work together to determine how we could help her,” Smelser said. “It turned out that she was epileptic. We checked her vital signs, sat her up and gave her water. It was shocking, but we were thankful that we could provide some help.”

“It makes you realize how much one branch depends upon the other and how collaboration can be so beneficial in the health care field,” Youngblood said.

“Andrew is a wonderful example of the dedication that pharmacy students exhibit when it comes to service,” Bennett said. “Our students are continually volunteering their time to give back, not only within the state of Mississippi but also nationally and globally.

“It’s also great to see that our students are getting early experience working with other disciplines. Interdisciplinary education is so critical in the field of health care, and UM students are being proactive in working together outside of the classroom.”

Smelser and Youngblood, who both want to take additional trips to Haiti, decided to take their service a step further. They were introduced to 3-year-old Stephanie Pierre on their trip, and in that moment, they decided to sponsor a child from Cap-Hatien.

“We didn’t go down there with the mindset that we were going to sponsor a child,” Smelser said. “We realized how incredibly blessed we are to be living in the U.S. with all of the resources we have. After we had witnessed day-to-day life in Haiti, we figured this was the least we could do.”

The sponsorship will provide Pierre with necessities such as schooling, food and basic medical care.

“It’s a shot at life, the shot that everyone deserves,” Youngblood said.