A Biology Faculty Member Gives Back 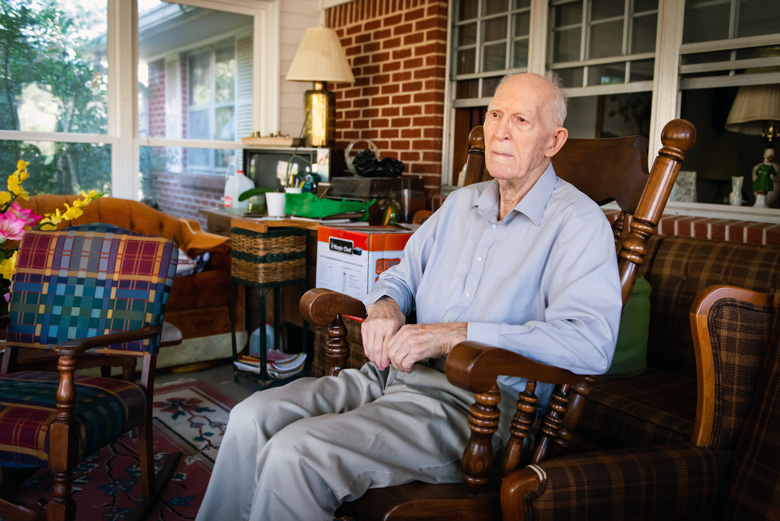 Dr. Bill Longest enjoys a moment of reflection on his porch in Oxford, Mississippi.

Dr. William D. Longest, who taught biology at the University of Mississippi for over two decades, recently established a scholarship endowment to help offset tuition expenses for students who transfer to Ole Miss from a community college.

“We are extremely grateful to Dr. Longest for his vision to incentivize students to choose Ole Miss for their continued higher education,” Wilkin said. “It’s always especially meaningful when a former faculty member – who has already devoted his life to preparing and mentoring students – wants to give back in this way.”

The first and current recipient of the Longest Scholarship, Hunter Robertson, an accountancy major from Gore Springs, Mississippi, said, “I was very thankful to receive the scholarship. Any help is greatly appreciated in college, and this actually helped give me a full ride to Ole Miss.”

Longest, the son of a dairy farmer, enrolled at Northwest Mississippi Junior College (now Northwest Mississippi Community College) in 1946 but soon enlisted in the U.S. Air Force. After four years of military service, he continued his education at Baylor University, where he earned an undergraduate and a graduate degree in plant physiology. He later received a doctorate in zoology from Louisiana State University.

“I got into biology from chemistry. The chemical side of biology is what really interested me at first and it still does,” said Longest, who continues to live in Oxford, Mississippi. “My first piece of research was in plant physiology. I hold a master’s degree that’s mostly botany and when I went for my doctorate at LSU, I switched to invertebrate zoology and did research on the distribution of planarians in parts of Louisiana.”

After college, Longest taught at Blue Mountain College, Northwest Mississippi Junior College, University of Memphis and Louisiana State University. The major part of his teaching career was devoted to Ole Miss, where he was a biology professor for 24 years.

He and his wife of 57 years, the late Catherine Taylor Longest, had no children of their own. But Longest considers many of his students like family.

“I’ve got 10 doctors and dentists in town that I had in class. One of them is my internist that I go to all the time,” he said.

“I’ve had a couple of major surgeries and the doctor who did those, Mike Lovelace, well, I knew what he could do because I watched him dissect a pig! He did a beautiful job with it, so I said, ‘That’s the guy who’ll do the surgery for me.’”

Oxford cardiologist Mark Strong, who graduated from UM in 1991 with a degree in biological science and from the UM School of Medicine in 1996, keeps Longest going.

“Dr. Bill Longest was a gentle giant, a very animated instructor and a very kind man,” Strong said. “He took me under his wing as a sophomore biology major and his confidence in me gave me confidence in myself. Now 20 years into a medical career, I owe a significant part of my success to Dr. Longest.”

“I would hunt with my friends on their property and afterwards Catherine would fix us a big meal. It was a feast really,” Cochet remembers. “So I really miss her first of all, and I would refer to him as a noble gentleman. He has this supreme ethic of love, character and integrity that a lot of people just don’t have.”

From delivering milk for his dad and serving his country to helping his wife care for her invalid brother and for an ailing neighbor, Longest “has lived a life of selflessness with a very strong sense of duty,” Cochet said, adding that the professor was an elder and treasurer at College Hill Presbyterian Church and served on the College Hill Water Association board.

Now, Cochet’s children, ages 9, 7 and 3, visit their neighbor, where they are fascinated by the trinkets he’s collected throughout his lifetime.

“My children are captivated by those things and it makes him very happy.”

To support the Dr. William D. Longest Scholarship Endowment, send a contribution with the endowment’s name written in the check’s memo line, to the University of Mississippi Foundation, 406 University Ave., Oxford, MS 38655. Gifts can also be made online at https://give.olemiss.edu. First preference for the scholarship will go to students from Dr. Longest’s birthplace: Calhoun County, Mississippi.