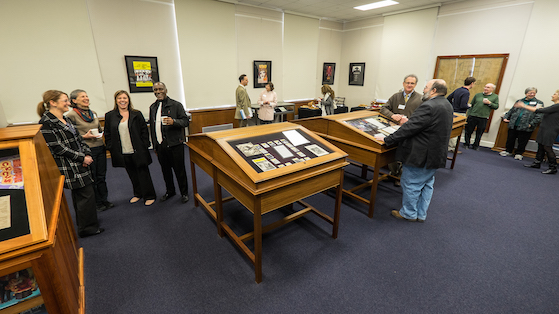 The J.D. Williams Library features a new exhibit available to the public in their Department of Archives and Special Collections. Photo by Robert Jordan/UM Communications

An untitled play by William Faulkner, a Civil War soldier’s diary and promotional materials for several famed blues artists are among dozens of artifacts in “Hot Off the Press: New and Newly Available Archive Collections” at the University of Mississippi Archives and Special Collections in the J.D. Williams Library.

The exhibit, which is open in the library’s Faulkner Room through Dec. 16, features items from the library’s literary, historical, blues and political collections, some of which have never before been displayed.

“This display is a new twist on the treasures exhibits done in previous years,” said Jennifer Ford, head of Archives and Special Collections. “The showcased items are from recent collection gifts to the department, as well as newly processed collections now available for use by researchers.

“Special Collections is greatly indebted to all its donors and our staff thought it was an opportune time to feature items from several new acquisitions and recently opened collections.”

Several historical pieces are showcased. One antebellum piece documents a lawsuit filed by Native Americans against white men over land. The lawsuit waited 30 years before having its day in court. Another piece is a plantation ledger, with references to slaves from a plantation in Oxford.

Other historical pieces include a revealing diary from a soldier in the 15th Mississippi Infantry Regiment, as well as documents relating to the final days of the Civil War in Mississippi.

Blues archivist Greg Johnson has highlighted a number of music collections, including that of the Rosebud Agency, which represented artists such as Muddy Waters, Willie Dixon, Luther Allison and Trombone Shorty. The agency was in operation from 1976 to 2014, and founder and owner Mike Kappus donated materials to the library’s permanent collections.

Arthur Kreutz, a composer, conductor, violinist and professor of music composition at Ole Miss from 1951 to 1965, is the subject of another display that includes several of his compositions, including his opera “The University Greys.”

The Modern Political Archives has installed eight cases that explore the congressional collection of U.S. Sen. James O. Eastland, who represented Mississippi in 1941 and 1943-1978. Eastland also chaired the Judiciary Committee from 1956 to 1978.

Included in the exhibit are campaign materials, legislation and memorabilia, including presidential documents and letters from notable individuals such as Apollo 13 astronaut and Mississippi native Fred Haise, actor John Wayne and Mississippi artist Theora Hamblett.

“Although congressional collections such as Eastland’s might at first seem only useful to biographers and political historians, they actually have a much wider application,” said Leigh McWhite, political papers archivist and associate professor. “The papers are a great resource on local history and public works projects within the state, and researchers can examine correspondence for grassroots opinions on a wide array of national, state and local topics.”

The library will host a series of brown bag luncheons with guest speakers to provide more information about the items on display. The first brown bag session will be at noon Sept. 1, with Ed Meek discussing “A Day with Mr. Faulkner and His Horses.”

At noon Sept. 13, Katrina Sims will give insight on her use of the James O. Eastland Collection in her doctoral dissertation to examine the history of the Taborian Hospital in the African-American community of Mound Bayou. And at 3 p.m. Sept. 21, Harry Bolick will discuss Mississippi fiddle tunes and songs from the 1930s.

All brown bag events are set in the Faulkner Room. Other events will be added as the fall semester approaches, Ford said.

Visitors can view the exhibit from 10 a.m. to 1 p.m. Mondays through Wednesdays and 8 a.m. to 5 p.m. Thursdays and Fridays. Beginning July 5, the exhibit will be open 8 a.m.- p.m. Mondays-Fridays.